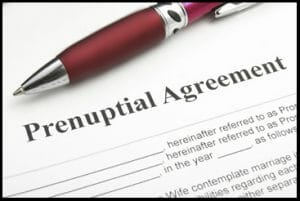 Let’s face it:  The prenup seems so utterly unromantic — or just plain wrong — but it’s also become so right for so many these days: those
keenly aware that a marriage may end up in a legal separation, divorce or death. Most prenups tackle financial issues such as real estate, division of bank accounts and potential spousal support in the case of divorce or separation.

In 2008, the divorce rate was about 50%. Among married Americans, the median duration of their wedded life in 2008 was 18 years, according to Pew Research Center’s analysis of government data.  Among the divorced, 15% say they regret not having a prenup in their most recent marriage, according to the Harris poll. Men are more likely than women to have this regret, at 19% vs. 12%. Nearly 40% of divorced Americans also say they
would ask their significant other to sign a prenuptial agreement if they remarried.

Financial, legal and marriage experts do agree on one front: Before getting hitched, couples should sort through issues such as credit card debt, discrepancies in each person’s wealth and the possibility of future inheritances. Most prenups tackle financial issues such as real estate, division of bank accounts and potential spousal support in the case of divorce or separation.

But a number of factors are fueling the prenup bump. At a broad level, they have gained more acceptance as a financial-planning tool. More than one-third of adults — 36% — said prenups make smart financial sense, according to the Harris survey. When Harris asked that same question in 2002, 28% said so. In a recession, people want to hang onto the assets they have, so they increasingly look to these pacts as an option, says Robert Nachshin, co-author of the prenup guide I Do, You Do … But Just Sign Here.

Also, as marital trends change, so do attitudes. Many couples are tying the knot at an older age, so those folks — as well as those entering a second or third marriage — are bringing more assets into the relationship than, say, a 23-year-old would have.

And of course, prenups are an extremely popular topic on the Internet (particularly on wedding, news and celebrity sites). The gritty details of actor Dennis Hopper‘s and golf aces Tiger Woods‘ and Greg Norman‘s prenups have all been hot topics.