John and his wife were struggling in their marriage for a couple of years, but they were managing to hold it together until March 17, 2017. That’s when their whole world was turned upside down.

On that day, they found that John had an aneurism in his brain that ruptured; sending them and their two daughters on a long, hard journey. He went from being a very active man, who used his RN skills to help patients in emergency rooms, to being a patient there with his life hanging in the balance.

John recalls that his wife had to take control of the situation as well as assuming all the responsibilities at home that he had handled in the past. As he began his long road of learning to walk and talk again, his brain and emotional functioning were constant challenges.

The divorce rate for marriages where one party is struggling with major brain functioning is 80 – 90%. As time went on, John and his wife became part of those statistics.

When they went to Alpha Center for a consultation, John remembers that he was thinking “what can I get” and “what will she take.” He learned that it was far better to focus on “what do we and our daughters need.” John said, “I came in expecting to go to war and was relieved to find that we were here to work on a peace treaty.”

He was very anxious about the cost, since he was no longer able to work, and their debt was climbing due to high medical expenses. His friend had spent $100,000.00 so far and had no idea of what the ultimate cost would be. He remembers feeling a great comfort when he heard that the reasonable flat fee Alpha offered would cover everything; including parenting, tax and financial experts who worked together with their attorney.

John’s greatest concern of all was for his two daughters who were ages 17 & 11. He wanted to make sure that he could have a strong and healthy relationship with them after he moved to another home. He appreciated what a good mother his wife was, and he knew it was important to have a good co-parenting relationship for the benefit of their daughters.

There were certainly times of great challenge between them because of their different parenting styles, but they both focused on doing what was best for the kids. As he recovered, John was eventually able to be their soccer coach and remains a vital part of their busy lives.

There is so much more to John’s story that will inspire anyone with a heart. He created a website and wrote a book called “Brain Go Boom” which can be accessed at www.braingoboom.com. He is currently writing another book that will chronical his journey through his recovery and divorce. He also mentors others who are living with brain damage and goes on medical missions to Haiti. John is truly an inspiration to all of us. 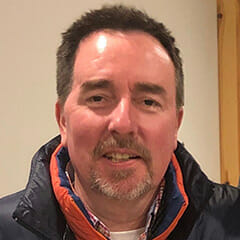